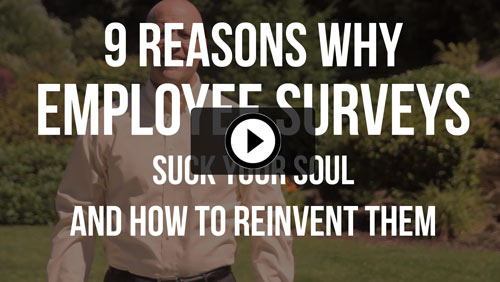 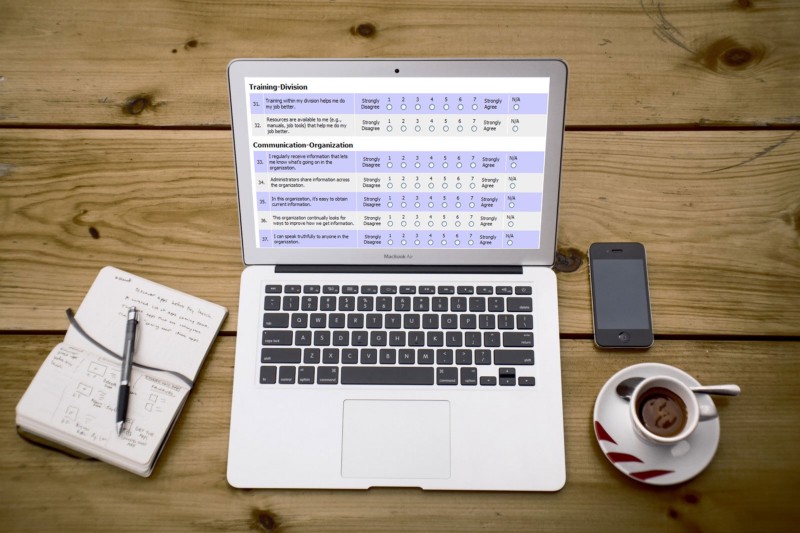 “I’m so excited to answer the employee survey!” said no one. Ever.

These are all huge disappointments. (Well, huge if you were really excited about Al Capone’s vaults.) But let’s talk about the last.

As I have interviewed and talked with thousands of employees I hear the same reasons. This list of why employee surveys suck your soul comes from them — the employees. The simple and obvious reasons are first, progressing to the less obvious and more impactful.

Most companies do an annual survey. Very few do it biannually. One company I recently talked to does it every three years!

Imagine checking your weight only once a year. “Man, I knew I had gained some pounds, but I didn’t realize it was this bad!” Or checking your bank account once a year. “Really? I don’t have any money left? No wonder these checks have been bouncing since April.”

Finances are measured daily. Call times, sales, revenue, production, quality and so many more factors — these are measured and reported on often. Sometimes several times a day, if not weekly.

But culture — something critical to a company’s success — is only checked once a year?! That doesn’t make sense.

Yet, it is understandable to a degree. How can a company effectively measure its culture or employee engagement without spending huge amounts of resources? (The answer is to come…)

We live in a world of texting, tweets, and a low tolerance for interruptions with little value. We like quick, short bursts of information and want to respond the same way.

But when we fill out a survey we are asked to take 20 minutes (on the low end) out of our day that actually turns into double the amount of time. All that for an interruption that, according to employees, is of low worth. Why? See #5 below.

No wonder volunteer response rates are often below 20% when not forced!

What we need is response at the speed of texting. Make it quick, short, and to the point, and then be done.

3) They don’t identify what is important

I once reviewed yearly survey results with the director of a large department of over 500 employees. The wall of the conference room was covered with the results, printed in large type. The numerical analysis he did was impressive. He identified the questions that had low scores or changes from the year before that were in the negative.

Speaking about one result he said, “This one worries me. I don’t have a clue what to do with this one.”

“If this score is low do you care? Is it OK that this didn’t hit high marks? If you ignored this issue, would it severely limit your team’s effectiveness?”

He thought about it for a minute and realized that, no, this question and result didn’t matter. So from there we went and took out all the scores that didn’t have a large impact on his organization.

Unfortunately, we assume that because we measure it, it must be important. For some it may be, but for others it may not. We must be careful and identify and work with only those issues that will make a significant difference.

Not in their true form. Instead, what they are shown is a version of the results that management wants to present to them. Unfortunately, too many times they are watered down and only present the best of the company. The negative results that can’t be ignored are given a positive spin.

Not that positive spin is inherently bad. I’m all for looking at the possibilities and trying to make things better. But it needs to be filled with soul and should be honest. Too often, attempts to show negative results lack both of these characteristics.

And think about this: The employees give, but there isn’t a return. To them it’s giving of their valuable time and getting nothing in return.

5) Lack of meaningful action from management

“It’s the flavor of the year.” This was the response from one employee recently when I asked, “Someone mentioned (name of company-wide initiative). What is it?”

Employees understand the pattern: Take the survey. See watered down results. Management creates a new program and aggressively pushes it. This becomes the new mantra. It runs out of steam. It’s forgotten and never talked about again. Next year, rinse and repeat.

Should we bash management for such an atrocity? No! Leaders of an organization, in my estimation, have too much to do — too much weight is on their shoulders.

But there is something we can blame: The culture and expectations of the modern organization, namely: Point #6…

6) Assuming that only management can make significant change

As I stated in this post, managers have control and it has been assumed that turning over control to employees is dangerous.

But what if we were able to give the information to employees and allow them to act? What if they held as much of the responsibility to create positive change as did the management? (see Insourced Management)

Sure, some companies have “empowerment programs” that mimic the transfer of control. But it is usually done within strict guidelines. For example, one company I worked with was hesitant to let employees work remotely. After much pressure they decided to give it a trial run.

To kick it off they laid down the guidelines (against my best advice): you can only do it one time every other week at most; your manager and your manager’s manager must approve it; you must give a detailed report of what you did the day you worked remotely. Your manager must review the report and decide if you can continue.

Guess how many took advantage of working from home? Almost no one. Why? It had to be done in a way that was contrary to it’s nature. Eventually, the company saw the low numbers of those who tried remote and decided that the employees didn’t want it after all, which was not the case. That’s like your mother handing you a piece of the chocolate cake you have been begging for and saying, “Enjoy it. But you can only eat it through your nose.”

What if we gave power to the employees to make positive changes? Not just in word, but in reality by changing the system? Without the data, employees are not sure where to direct their efforts.

If employees can see the data they can take action not only immediately, but also within the context of their work and make a positive change. As that takes hold, it spreads. Pretty soon we have broad change initiatives coming from from the bottom up — from all over the company instead of just the top down.

“We took the survey and were honest. Things were not good. A month later a few of us were singled out to go through a program about the very thing we were honest about. From then on we never gave our honest opinions.”

Eyes roll when an employee hears, “It’s anonymous.” Because they know it isn’t. There is always a way to single out employees and find out who said what.

“Individual blame” is actually the technical term for the practice of blaming the individuals in a system for failure rather than the deficiencies of the system itself.

In other words, when we get survey responses back we are accustomed to asking questions such as, “Why aren’t the employees’ behavior falling in line with what we have told them it should be?” or “What is it about the employees that they don’t like the program?”

Instead, we should be asking, “What is it about the system(s) (program, organization, process) that makes it difficult for the employees to do what we have asked them to do?” This is labeled as “system blame,” when we look at and deal with the environment rather than the individual.

Because, as we all know, put an event speaker on stage who has incredible content but is dry and monotone and the audience will fall asleep and learn little. But add some dynamic elements, humor, some video and interaction with the audience, the same content is not only consumed by the audience, it is devoured and is remembered and applied over a much longer period. The final results of each scenario are polar opposites.

9) Survey’s are not designed for employees

We may not have thought of it from a design perspective, but when you think about it, it’s obvious: Surveys are not for the employee, they are designed for the executives. It assumes that management is the consumer and the employees are the producer. That’s almost a given, right?

But following that train of thought, the producer should give the consumer what he wants. And, often times I have been told, the employees only say what they want the managers to hear, if they say anything at all.

There isn’t a reason an employee would want to respond, other than the force that may come from their supervisor. If employees can get away with it, both quality and quantity will suffer.

The way we do it now, we put a bottleneck on both of these characteristics and then get bent out of shape when only 20% of employees respond, and many of them gave garbage answers just to get through the survey quickly.

What if we changed the producer/consumer assumption? What if we said that the employee is both the producer and the consumer? If we want the producer to produce more quantity and better quality, we need to design the process of giving feedback to allow the producers to want to produce quality and quantity. Otherwise, like a bad stomach bug, they will throw up whatever is forced upon them.

In addition, if they know they are producing it for themselves, they will care about the quality of the goods.

If we design a feedback mechanism in a way that employees want to respond and it delivers the results not only to management, but also to the employees themselves, think about the end result! More quality feedback given to more people who can make lasting changes. In the end this means real results.

Even though we know these 9 points to be true, why haven’t we done anything to correct them? It’s because it isn’t easy — it’s hard. The answer isn’t obvious nor is it staring us in the face. We need to look hard for the solution. It will take test and trial and hours of thinking of scenarios and designing something that will work for both employees and management.

Over the last few years this is exactly what I have done. And the result is viaPing.

It is first designed for employees’ use — to be a quick, consistent feedback mechanism that gives the employee and management access to the data to make rapid changes to their respective areas. It gives a natural reward for responding (seeing yesterday’s results) and allows everyone to focus their efforts on what matters most for them.

Employees now have a reason to care. And when they care, we will find solutions, innovations, and hidden insights we have never seen before.

viaPing replaces the 9 soul sucking characteristics above with…

1) It happens every work day.
2) Responding is faster than a text.
3) Participants can say what is important to them.
4) Employees will see the previous day’s responses.
5) If management doesn’t act, that’s OK. Employees can act now that they have the data.
6) It can be proven anonymous.
7) See #5.
8) Because employees see the results, they can look at both individual and system blame more clearly.
9) It is designed for the employee as a producer and consumer.
10) It simply works. Simply.

Try it out for free, at viaPing.com

The #1 Reason Employee Engagement Isn’t Happening at Your Company and Why No One Knows About It Take This Challenge and Love Your Work!

The Purpose of Asking Questions