Social Business Failure #7: Give Them Another Option 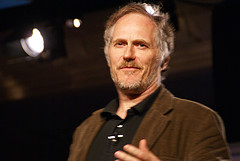 Tomorrow I am speaking at the NASA IT Summit. Last night I saw an act that encapsulated the essence of this failure. The evening open reception had (my guess) over 1000 people. There was food, an open bar and tables and chairs. Most people were standing in small groups talking. The environment was set up to encourage mingling and discussion. But they scheduled a speaker during that time.

About 30 minutes into it, the emcee introduced the speaker. The speaker at the beginning asked for about five minutes of our time. No one stopped talking. About 30 seconds into it, she said, “Hello. Excuse me. Could I please have your attention? This is really important.” Then she kept talking and so did everyone else. About two minutes into it, emcee her took over and said, “Will you please give her your attention? Let’s show some courtesy and listen to the speaker.”

Nothing they could do stopped the talking and mingling. Why? They set the environment one way and then completely contradicted it. The audience chose the path of least resistance and ignored the speaker.

I know of one CEO who started blogging in one place, then his IT team gave him another. Now his posts go to both places. Comments made on one blog don’t populate to the other. So the effect is only half as good.

I have seen teams say, “We want you to blog.” Then no one does and they are disappointed that “blogging” didn’t work. Of course it didn’t! They didn’t have a reason to blog.

KEY: You have to have a reason to do anything, including using social media. No reason = no use.

I once listened to a keynote speech by Tim O’Reilly (who made the term “WEB 2.0” popular). He said, in essence, “How do you get people to use Web 2.0? Force them.” At the time I thought it was harsh – but he is right. The more and more I thought about it, if you give options, people will take the path of least resistance.

What is normally that path? The status quo – what they are used to and comfortable with. Why would that team blog if they have email? Why would those at the reception stop talking?

So how do you “force them?” Take away other options. For example, you may ask a critical question of your team, but put it on a social business platform where, if they want to talk about it, they NEED to go there. Or put key information in a your platform. Make it a part of how you are doing business.

We don’t need to be harsh about this at all. Just make it easy to become engaged in social business.

My TEDx Talk on Failure