WHY? My Favorite Question 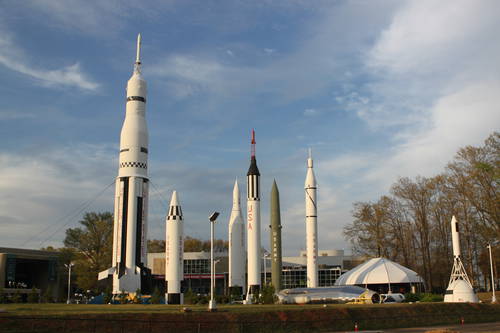 I was a consultant at NASA in Huntsville, Alabama for six years.  This picture is a sight I would see every day as I went in to work. During that time social media was at the beginning stages of becoming mainstream and using social technologies in the workplace for business objectives was a brand new thought.  My job was to get NASA not only onboard, but help change the culture to accept the new way of working.

By extension of my role, I was also seen as the default social media expert.

A woman called me up and asked if she could meet with me.  The manager of her team said they needed a team Twitter account and to ask me how to get it started.

“So we can tweet out what we are doing.”

“Because my manager said we should.”  I could tell this line of questioning wasn’t going to go anywhere, so I went along with the assumption that they needed a Twitter account.  We went with it for a minute and I made a suggestion.

“Because they won’t allow us.”

“Because that is what management said. They never have let us.”

“They would have a coronary if we asked them. They just won’t allow it.”

By this time I was trying to turn this into a teaching moment and remain calm, despite their building anger and their inability to get past the “because they said so” syndrome. The more I questioned her, the more exasperate she became; how I dare challenge the invisible barrier that had always been there!

My questioning continued. Eventually, I suggested that she question the management’s decision to have a Twitter account.  To clarify, I gave a related example. One of the requirements I had for the project I was working on was the ability to access the system from home without VPN.

Before I finished the story, she laughed and said, “Yeah, I know the security group. They would never allow that.”

“They already have,” I said. Her face drowned in disbelief. “They freaked out when I first suggested it,” I said, “and even for months afterwards, but they did it because I kept asking ‘why.’  Why can’t they access it from home?  They gave me many excuses, each of which faded away when we critically looked at the reason. They were just told that this was the way it was and never had never before questioned why.” She was beside herself but also learned that there were some barriers worth questioning.

After more discussion agreed that Twitter was not a good tool for the team to use in this context. The only reason they wanted to do it was because everyone else was doing it and it was seen as a “cool” thing to do.  In the end, I think my “WHY?” questions broke her down.

As we left the meeting we ran into one of her colleagues. ”We are not going to use Twitter,” she told him.

“But they told us they wanted us to use Twitter!  Why won’t we?” the colleague shot back.

She looked at me and smiled, knowing what I would have said at that moment.

She replied, “I’ll explain it to you later.”

At that moment, I realized asking the question why over and over again changed not only the direction of effort for an entire team, but saved them from eventual frustration and failure.  That one-word question made her dive deep into evaluating the team’s goal, stripping away the surface level reasons to expose the deeper motivations and eventual outcomes behind their request.

It was then that I truly started to realize the power of an expertly asked question.

Ever since then, WHY has become my favorite question.

The Start of My Fascination With Questions The Question Game