Social Business Needs Those Who Are Willing To Be BOLD 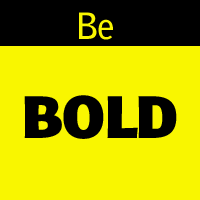 Are You So Bold…

Trust, openness and transparency are bedrock ideals of Social Business – yet too many company cultures fears them.  For businesses to go into the next phase of  economics and be successful this MUST change.

So many people won’t do the right thing because of fear of a personal backlash rather than the fear of a project’s failure.  When America’s CIO, Vivek Kundra, spoke about the billions of dollars wasted, over and over again, on failed IT projects, I was astounded.  We all know that has to do, in large part, with deformed cultures.

Success will not be built on whether or not we have some obsure piece of documentation filed, but rather if we, as people (not a process), create a new culture.  That’s right – you and I and your office neighbor.

We cannot expect to progress without change.

What we need are those who will be bold.  Those who are willing to take a risk.

But if not you, who?

(An aside: Being bold is not the same as being overbearing or toxic.  I fully support the former and frown upon the latter.)

I Take It Back – SOCIAL Does NOT Belong In HR

HR Doesn’t Get Enterprise 2.0 – But They Should